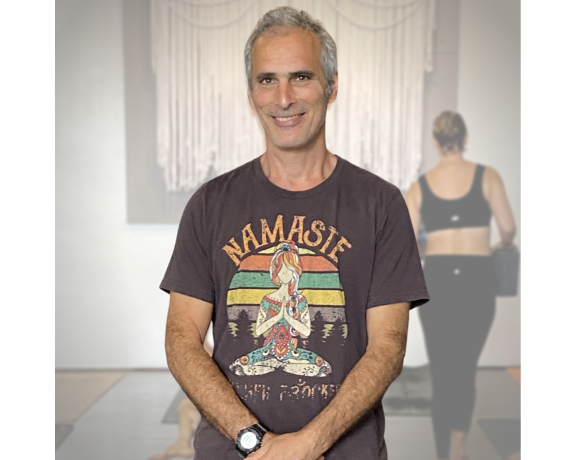 Creator of the „real“ Power Yoga

We feel absolutely blessed and are thrilled to welcome Bryan this year, June 2023, in Tajet Garden Cologne!

Bryan’s definition of Power is broader than most as he understands the definition of Power lies not only in the masculine qualities of strength (yang) but also with in the feminine qualities of gentleness (yin) and real health comes from a proper balance. Just as 2+2=4 strength + gentleness = moderation (the key to health). Taking things even further Bryan recognizes that the proper balance is personal and needs to be discovered.

The Bryan Kest Master Class is a short (3 Hours) immersion in the “Practice of Yoga”. Practicing yoga means strengthening not just the body but even more importantly, the qualities of our mind that actually have the largest impact on our physical well-being.

Having a tone and supple physique certainly has its benefits yet real health and contentment come from a calm and peaceful mind.

Science and medicine are now telling us ninety percent of all disease is psychosomatic; in other words, most diseases originate in from our minds and manifest into our bodies. This is why ninety nine percent of all yoga practices are meditational or devotional practices, in other words, practices that address the mental state. Knowing now what science and the yogis are telling us, it would be irresponsible not to address this and bring it to the forefront of our practice, in other words, a fitness routine dominated by our wisdom rather than our vanity.

In our 3-hour class together, I try to bring all this together. A strong, well-rounded, yet simple physical practice that leaves every nook and cranny in our bodies vibrating with vitality while challenging our minds in the sense of strengthening the qualities of mind that are most useful, positive and powerful while eradicating the qualities of our mind that are harmful and stress inducing. Strengthen qualities such as: calmness, patience, focus, gentleness, gratitude, humility and acceptance, while weakening qualities such as: judgment, competitiveness, distraction, reaction, and criticism (just to name a few). Qualities of mind that have the biggest impact on our health and happiness are like anything else in the sense that if you feed them, they will grow big and strong and if you don’t feed them, they will weaken and die.

If you want to know how I do this, you will have to come and see because words cannot replicate the experience that’s a culmination of almost 40 years of my own yoga practice called Power Yoga.

Class consists of a lecture and the remainder asana and meditation practice.

Space is limited. Please bring YOUR OWN MAT.

Bryan Kest has been practicing yoga since 1979 and has been teaching since 1985. He developed his unique, distinctive style of yoga, called PowerYoga, in 1979. Over the years, this style, an amazing workout for the body, mind and spirit, has made him a well-known, popular teacher across the country and around the world.

His mainstream popularity is matched by an authentic foundation in the ancient practice of yoga and a long path of development as a yogi (a practitioner of yoga). At age 15, Bryan uprooted from his native Detroit home to make a life change in Hawaii. He moved to live with his father, a doctor, who understood the benefits of yoga. Like many of us, Bryan originally thought yoga was nothing more than strange contortions, but that changed when his father introduced him to a physical style of yoga called Ashtanga. This appealed to him immediately, and he soon observed great changes in himself, both physically and mentally. Yoga quickly became his passion, one that would take him to India for a year to study with one of the greatest yoga masters of the world, Pattabhi Jois. He has been continuing on his yoga path ever since.

Bryan founded two studios in Santa Monica, CA. He also teaches at workshops and retreats around the world; provides an intensive Teacher Training program; and is featured in his own Warner Brothers video series from 1995, as well as a newer video series and audio CD series. His most recent endeavor is PowerYoga OnLine. This online tool features streaming videos of Bryan’s classes, along with programs and series including a Teacher Training meant to help support and deepen one’s yoga practice. These are usually recorded live and streamed to students around the world. For articles by Bryan and more information about PowerYoga, visit PowerYoga.com.